Lydia, a tale of love and courage

​  Lydia’s heart knows her twin brother wasn’t killed in battle as the official report claims but no one heeds her pleas. It’s up to her to prove them wrong, even if it means secretly going to Portugal to search for him. Risk her reputation, endure physical hardships, and weather any adversity? That she can do. But enlisting the help of a man she once loved and hoped never to see again will take every bit of courage she can muster.
Soldier, explorer, sometime spy, Captain Lord Montford is dedicated to his profession. The last assignment he expects or wants is to escort Lydia Hightower on an ill-considered expedition across the rugged terrain of Portugal. If anything should be labeled a wild goose chase it’s this foolish quest to find her brother. Still, he can’t allow her to make this journey on her own—even if she is a reminder of past sins he can’t forget. 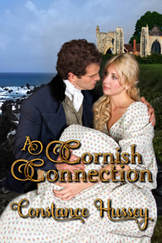 ​A determined man on a singular path, Harry Bryce is not pleased when the Crown awards him a title, nor is he gratified to learn of an unexpected inheritance in Cornwall. Even less welcome is the mandatory sabbatical from his position at the War Office, just when England needs every man in the fight against Napoleon’s subversive agents. Chafing at the unwanted holiday, Harry uses the time to inspect his new property, only to be entangled in the affairs of a young Cornish woman whose family and home are threatened with destruction. Compelled by his compassionate nature to assist her, he is caught in a complex situation that thoroughly disrupts his carefully ordered life.
In contending with repeated attempts on her brother’s life, an uncle unashamedly stripping the estate of income, and a greedy earl who is desperate to mine copper on her land, Kerra Trevaine needs all the strength and fortitude she possesses. But the arrival of the mysterious Mr. Bryce is perhaps the greatest danger she faces. For while he stands firmly against Kerra’s enemies, the dangerously attractive gentleman threatens to win Kerra’s heart—and that may be the most challenging test of all. 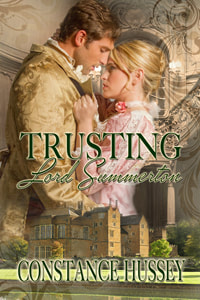 ​                               TRUSTING LORD SUMMERTON
AN OLD FLAME IS REIGNITED WHEN A WOMAN IS FORCED TO ACCEPT
THE AID OF A FORMER FIANCÉ
Lord Summerton knew he was a fool to tangle with Mary. She was trouble with a vengeance and he already had enough complexity in his life. He was sure their love had been but a young man's fancy. Still, to see her so wounded and not offer his aid was beyond him. Whether even the strong power of his love can heal her is uncertain—but he had to try.
Mary's battered heart is closed to friend and lover alike—but it is not closed to revenge. She could not bring down her enemy alone, however. She had to accept help—help which might be more dangerous than anything her foe might contrive. For the outstretched hand belongs to a man she had once betrayed and she feared that deep in her heart lay the long-buried embers of the love they once shared. 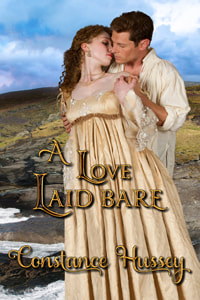 Lord Halcombe is devastated when his bride vanishes at sea only months after their wedding. Her sudden reappearance almost two years later with a child she claims is his daughter is even more shocking. Now, torn between the pain she has caused him and the love he still feels for her, Halcombe is forced to decide both her fate and his.
Pregnant, penniless and trapped in a foreign country, Frances has but one goal—survival for herself and her daughter. Only after a perilous move to Portugal is she free to choose her destiny. Return to the husband she still loves and who may have betrayed her, or build a life far from England.

Four gentlemen, bound together through a lifetime of abiding friendship.
Richard, whose cold upbringing never prepared him for an independent, passionate wife.
Colin, the suave diplomat who always had his way, until a long-lost love upends his life.
Harry, whose dispassionate mask was never threatened, until he met the intriguing Kerra.
Ned, so dedicated to his clandestine profession that he neither expected, nor wanted, a woman in his life—and especially not his nemesis, Lydia.